Toddler picky eater meals is what my wife and I have grown accustomed to, and given that our son is currently non-verbal, it’s made extra difficult to gauge what will and won’t be the ‘right’ thing to serve on any given night.

Generally the only time we know we have failed to deliver Andre whatever it is he is willing to eat, is when he tips the bowl of food upside down/throws it and or, starts screaming relentlessly.

Often these reactions come at times when we’ve interacted with our son earlier about what he could expect, based on what he’d eaten or not eaten in prior nights, and what he had and hadn’t refused during the day whilst at childcare.

Getting our son to eat has been an absolutely never-ending mission since he came into our lives in 2017.

As we’ve now found is apparently very common with children with ASD, Andre is pretty much obsessed with chicken nuggets-and various forms of nuggets, i.e. chicken balls/chicken munchies/mini tenders/dino snacks as his absolute number 1 go to food at dinner times. 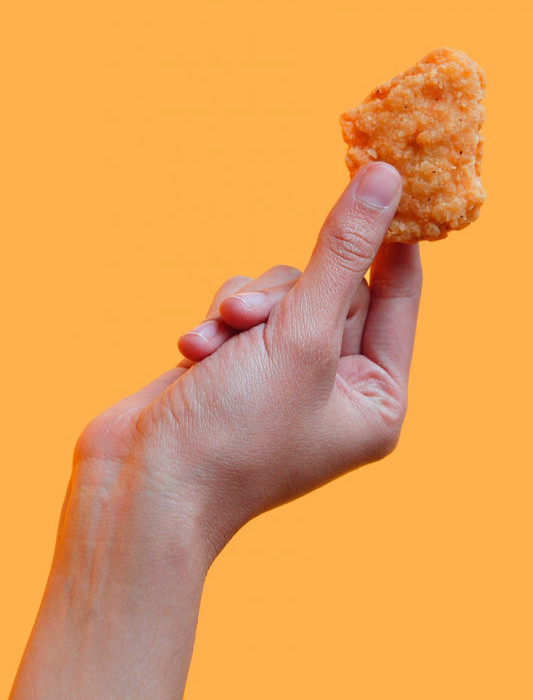 Obviously every person on the autism spectrum will be different and  have their own likes and dislikes, but we have read, and been advised, that a particular fixation on one or a handful of ‘go to’ foods are very common for those on the spectrum, and is certainly the case for us.

Aside from chicken related stuff, Andre will usually eat with some degree of consistency:

That is literally about the entire list of foods that our son will eat up until now.

Our daily meals that we prepare for him are generally just a varied rotation of these few items. Some of these he’ll still just not eat for sometimes days or weeks at a time, then return to them.

Aside from these foods, he’s tried a little cheese here and there, and a tiny amount of chocolate (which he screwed his face up at), but certainly nothing substantial enough to be able to incorporate it into his regular foods list.

The burden of eating 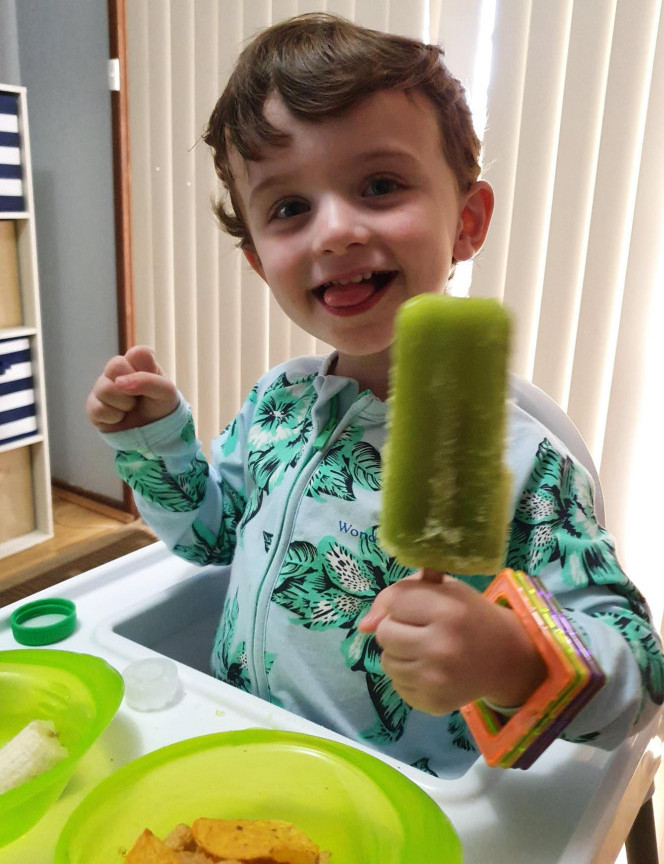 (Above: Ice Blocks/ popsicles are one of the few foods we don’t have to beg Andre to eat, he loves them!)

Andre’s weight is something we tend to keep a close eye on, as he tends to border on the ridiculously thin line at times.We try our best to beef him up any possible ways we can come up with, but mostly to no avail at all.

This can be difficult to deal with at times, with long days at work, followed by all the usual parental duties of picking up children, organising baths, meals etc, only to have them thrown back at you, or in the very least, receive quite an earful of piercing screaming.

As incredibly frustrating as just those usual parental duties can be at times, when dealing with a non-verbal, autistic child, we try to remind ourselves constantly that it is still even MORE frustrating for our son.

Since Andre has very few words thus far to say what it is that he wants, or what has upset him so much, he is generally just reacting to things the only way he knows how-like anything, if they are getting the desired outcome, why would they want to change?

I have read many times that it takes the average child an average of about 15 times being offered a certain food, before they’ll try it.

I’m guessing much of this research was based around neurotypical children, as some things for us, like red meats, vegetables etc, have been tried a heck of a lot more than 15 times, yet were still coming up to the same Andre brick wall each time sadly.

Through our regular therapy sessions with Andre, we have started learning about the importance of taking note of the ‘antecedents’ (what is happening just prior to the behaviour occurring) that occur prior to any of Andre’s very theatrical, extremely loud, screaming tantrums.

We have certainly found that our son, like many others, struggles with transitioning from one activity to another.

Often it’s just the simple things that other parents of neuro-typical children would not struggle with or have to think twice about, that can be the causes of some of our son’s biggest upsets.

For us, this often involves situations like Andre leaving the dinner table and transitioning to getting ready for his bath.

Lately, he’ll often want to go straight from the dinner table back to the lounge room to watch his favourite TV shows.

As soon as we have to physically start guiding him towards the hall way and bathroom for bath time, he’ll often start screaming whilst walking that way, and will somewhat try to make it known that he’s not happy about it at all.

This usually continues until  he’s actually in the bath, as usually a few seconds into his bath, he’s remembered how he loves water, and actually enjoys bath time, then we’re okay again. 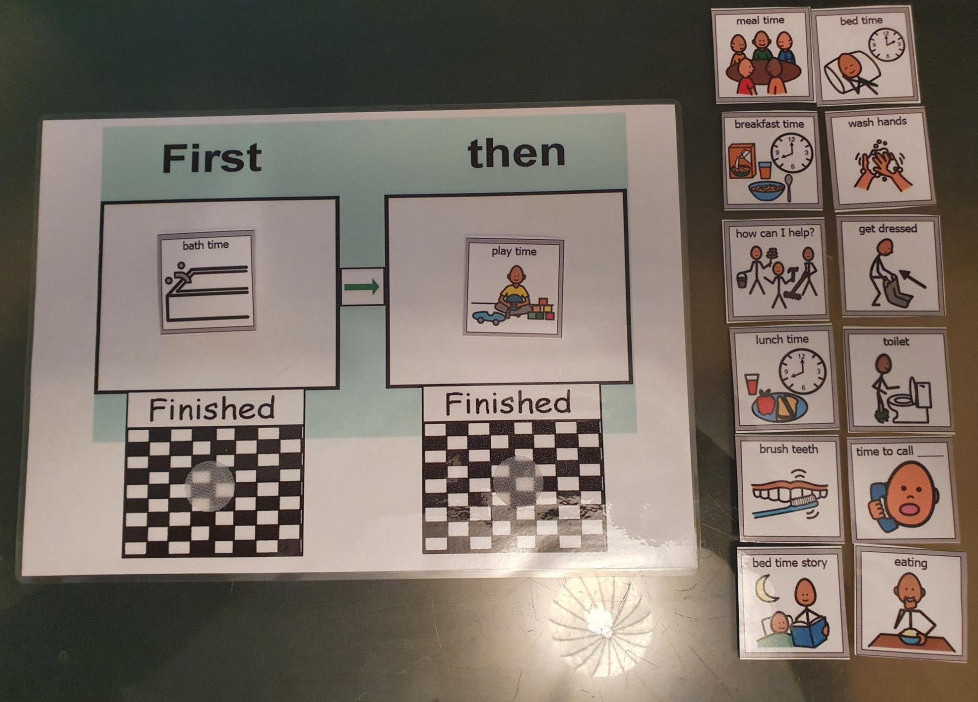 First and Then Approach

Our therapist recommended we attempt the ‘First and then..’ type visual boards, to use with our son, to try to assist him with transitioning from one activity to another.

The idea is simple, you use simple graphics to try to illustrate that you are just going to do this First-i.e. ‘Have a bath’ but Then, this will be followed by an activity the child typically enjoys, such as ‘Play with our toys.’

In a way, this was also how I was raised, since as far back as I can recall, my brothers and I were always told we had to eat all vegetables at dinner time, before we were allowed to touch the meat.

On other nights, it was a case of having to finish all of our dinner if we wanted dessert. This has been something that my brothers have carried with us through to adulthood-I still struggle to touch meat on a plate before I’ve eaten all my vegetables or salad.

I guess, for most of us in society, a lot of things in life that we want, or work towards, we will often go through things that aren’t as desirable, in order to achieve.

It is my understanding that some of this ‘first and then‘ approach can work simply based around that same kind of logic-getting a child to understand that if they can just play ball, and get through this first activity, then they can earn a reward afterwards.

Again, in our case, this approach has thus far only been successful a couple of times, as maybe, if nothing else, it signalled to Andre that a change of some sort was coming.

The issue for us of course, is that since our son doesn’t communicate with words, we can not yet quite tell for sure how much of what we say  he comprehends.

But I do believe in this kind of approach, as it can help to teach other important life skills too, such as the concept of  ‘give and take’ as opposed to just take.

Obviously, helping our children with understanding earning something, and the feelings associated with accomplishing a task, are also very helpful skills to try to equip our children with, to help them throughout their lives.

We’ve come to learn, through our own experiences, as well as through some expert advice, not to ‘sweat the small stuff at this point’ so if our son is eating almost anything, then that is at least something!

We’ve learned to take what can sometimes feel like steps backwards, in order to move forwards in other areas, that may be more important to Andre’s development.

Even much of the list of foods above that Andre does eat, only came about through our persisting with them after countless
attempts that were unsuccessful.

We certainly did find some value in what is often recommended in these situations-by introducing new foods one small part at a time, mixed in with a majority of more familiar, ‘safe’ foods.

As the person gets accustomed to the new taste, texture, you can slowly start to add more, until one day it may be served by itself as a meal.

On a couple of occasions we did have a little success with other suggestions such as blending a mixture of vegetables and various other nutrient packed ingredients into a drinkable, liquefied ‘meal’ as such.

I’ve known others who have had much more success with this approach, but as I said, this did only work for us with Andre a couple of times before he seemed to cotton on to what was going on  (he’s a smart little cookie), and subsequently, he started refusing.

If you have a loved one in a similar situation, I would recommend maybe trying a few of these strategies and suggestions,
as people definitely have had varied success with each, and again every person with ASD is different, just as we all are.

As always we encourage any feedback or questions on these topics, and always happy to share any information we have that may help anyone else out there.